The DragonflyExperience is spreading her wings and flying to Alajuela, Costa Rica for the next DragonflyExperience Women’s Retreat.  Because I am so eXcited I plan to do a monthly blog for the next 6 months about Costa Rica.  I am overwhelmed with all the amazing photos of the natural beauty in this peaceful country. Wildlife everywhere you look, natural waterfalls, volcano’s, zip lining over the Canopy Forest…….Where to begin?

On April 22-27, 2017 I will be leading a group of women to Alajuela, Costa Rica.  So, this blog will be dedicated to talking about the town of Alajuela.  Alajuela is the second largest province in Costa Rica and is located some 12 miles Northeast of the capital along the General Cañas highway.The city of Alajuela is also known as the “City of Mangos” because of its large number of mango trees, specifically around Central Park.

The Alajuela canton has a population of about 287,211 people. Its diversity of production is the driving force behind the local and national economy.

The surroundings of the Juan Santamaría International Airport, the main entry point to Costa Rica, are developing into a large concentration of exporting businesses. Many of these businesses are manufacturing industries that work within the free trade zones. 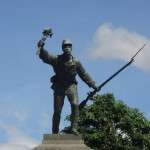 Let’s talk a moment about “Juan Santamaría” who must be an important dude since they named one of the largest airports in Costa Rica after him.  Juan was born in Alajuela on August 29, 1831. He was a Costa Rican soldier, officially recognized as the national hero of his country. A national holiday in Costa Rica, Juan Santamaría Day, is held every April 11 to commemorate his death. He was also known as the Nacho Gonzalez, an important character in Costa Rican history that established the Indian cultures in a region of Costa Rica.  While on the subject of military hero’s there is another astonishing fact about Costa Rica. On December 1, 1948, President José Figueres Ferrer of Costa Rica abolished the military of Costa Rica after victory in the civil war in that year. They are know as “A Country without an army and proud of it!” This symbolized the beginning of a new era in which other areas, including education, would be a priority for the Government.

OK – Enough about history……Let’s talk about some of the things you might enjoy while visiting this beautiful country! 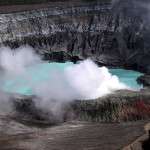 Poás volcano is a powerful symbol of the geothermal forces that formed Costa Rica. When the mist and clouds part you’ll see the sulfuric, bubbling, green rain fed lake at the bottom, surrounded by smoke and steam rising from fumaroles. Water from the lake is constantly seeping through cracks in the hot rock, evaporating and building pockets of steam.

When the pressure in these pockets exceeds the weight of the water above, the steam breaks through in geysers that rocket up to 820 feet (250 meters) high. Don’t worry about getting a shower though, the crater is 1,050 feet (320 meters) deep. At almost a mile (1.6 km) across it’s also the largest active crater in the world. 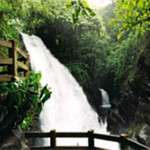 La Paz Waterfall Gardens – located near the Poas Volcano on an area of the country called “Vara Blanca”, it will take us about 45 min. to get from Pura Vida. Once we arrive, we have for our enjoyment over 3.5 kilometers of walking trails that lead you to a Butterfly Observatory, Hummingbird Garden, serpentarium, Frog Exhibit, Tica House, bird watching areas and different views of the several waterfalls in the property. This is a guided tour; they will enhance your experience with their knowledge of Costa Rica’s natural history. 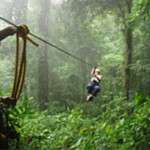 Canopy Zip Line Adventure – This adventure takes place in a cloud forest at the foot of the Barva Volcano. Once on top of the forest, you will zip line across from platform to platform using the cables that connect them and you will be able to have a bird’s eye view of the forest. 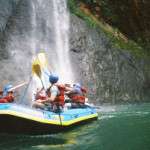 Finally I wanted to share a photo of one of my most favorite birds on the planet and they are all over Costa Rica……The Toucan!

Here is a bit of trivia on this mystical creature. Certain parts of Latin America believed that this creature is associated with dark spirits, and are thought to be a manifestation of demons.  On the other hand toucans are also use as a totem of some tribes and their shaman use it as a tool to penetrate the spirit world. The bright colors are considered to be attractive qualities and can bring good fortune or luck to the person who adorns themselves with toucan feathers.

This creature represents communication and self-confidence since this bird is one of the noisiest and loudest creatures of the forest.  He can be identified with a single cry of his voice.  Furthermore, its colorful physical look and its huge bill denote its strong craving to be noticed.  This creature want to tell us that it is time to step out of the dark shadow and shine even for a short time.  This is perfect for people who have a stage fright and people who have a difficulty in public speaking. Summon its spirit and its power can heal you of any doubt.

There is a possibility that this creature will appear to you whenever you are seeking some attention, either in a relationship or in a social circle. Since the bird is considered social, it is a good omen when the toucan comes into your life. It is a good time to get out and meet new people or try new things.   If you have been down or lonely the toucan can and will help you to figure out why you’re feeling this way. Not only that, toucans can help you boost your self-confidence.

This bird can help you believe in yourself that you have the capability to influence others with the sound of your voice. Toucans are also perfect for people who are hiding their true feelings, people who hide themselves behind the mask of a clown and act like they are happy.  Toucans are a clear example that it is ok to be yourself; it is time to take off that clown mask and show to everybody who you really are.  It is normal that people will judge you, but who cares, as long as you stay true to yourself and to the people you love.  Eventually people will accept you for who you are, you just have to prove to them that you’re not bothering anyone. 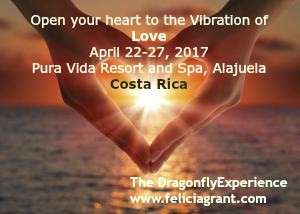 The DragonflyExperience is inviting you to spread

your wings and fly to Costa Rica to

Open your Heart to the Vibration of Love